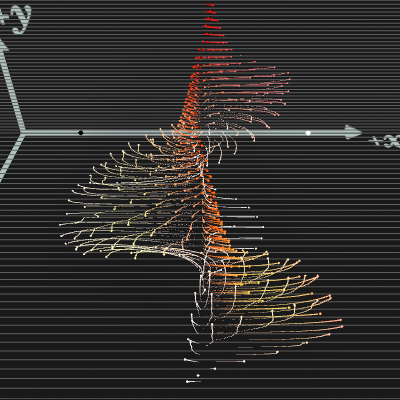 Aerospace scientists at Caltech need to understand  fluid flow along walls of vehicles such as airplanes and boats to improve vehicle performance. In order to do so, they need to visualize the building blocks of wall turbulence, an otherwise apparently chaotic flow phenomenon. Specially-designed software permits a single building block, essentially a three-dimensional, propagating wave, to be visualized using velocity vectors and particle traces. The flow history identified via particle traces reveals rotational structure.

We created an interactive visualization tool for simulating and disseminating a breakthrough theory on turbulence at the wall.

The tool may be used both to demonstrate and to explore the consequences of this theory by observing fluid flow deconstructed into individual constituent modes, and then by recombining modes into a full turbulent model. McKeon’s group is currently using the tool to further develop their research and share their findings publicly.